The Practice Of Law Is A Relationship Business 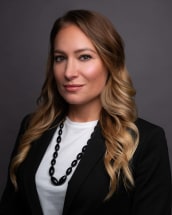 Nicole joined Zinober, Diana & Monteverde, P.A., in 2021 as an Associate in the firm’s Fort Lauderdale office. She is admitted to practice in all state courts in Florida. Nicole currently focuses her practice primarily on residential and commercial property insurance disputes, alternative dispute resolution, and insurance fraud investigation and litigation; however, Nicole began her career in law and real estate over eighteen years ago, including having worked for and with various home builders, title companies, real estate firms, and property insurance carriers throughout the state of Florida.Nicole earned her first two associate degrees in Business and Paralegal Studies, with membership into both the Phi Theta Kappa International Honor Society, Recognizing Academic Excellence and the Beta Gamma Sigma International Honor Society, Recognizing Business Excellence, followed by earning her bachelor’s degree in Finance with a specialization in Business Law from Florida Atlantic University, including membership into the Omicron Delta Kappa National Honor Society, Recognizing Leadership Excellence.

Although originally from New York and New Jersey, where Nicole attended high school, Nicole moved to South Florida over twenty years ago, where she now lives and enjoys having fun in the sun with her friends and family.